December was a time for reflection, celebration and working out strategies for times to come. “It has been a difficult year at FRIEND,” reflects Founder/Director Sashi Kiran, “ But at the same time we have seen exciting growth and progress, we have not only reached out to record numbers of communities— 137 in the west and 35 in the North and had to reconstruct our office and the production centre while conducting normal programing”. “The year began in a temporary office after the damage caused by cyclone Evan. At the end of the year we have two cyclone rated buildings where organization could serve the communities from. Our staff strength grew to 60 and we exceeded our projected outreach target to the communities. 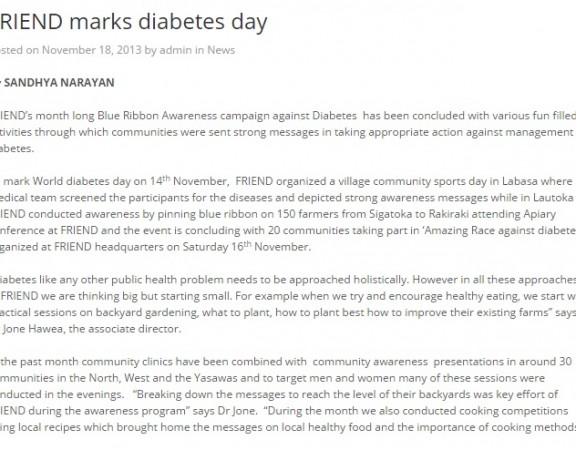 FRIEND’s month long Blue Ribbon Awareness campaign against Diabetes has been concluded with various fun filled activities through which communities were sent strong messages in taking […]
Do you like it?0
0 Read more